The Fox and the Crow

Hi Kids! This is Elyse and this was my first webpage which I wrote when I was 5 years old. I got some help making it, because I couldn’t spell all these words right without help or type very well–although I can now. I originally had a video I made posted here, but it wasn’t very well done. Anyway, it basically said we have lot of fun in Spring Grove imagining all the various things our ancestors might have been up to and we are using science and other sources to test out all of our hypotheses. Mostly, we are just having fun and enjoying one another’s unique company.

It is great that you could visit our Spring Grove Giants of the Earth Heritage Center website. Here, you can learn about the places where your parents’ families lived and where their families came from before coming to America and settling in Spring Grove or wherever they settled. Since as a kid, I naturally like stories, I wanted to write about why our ancestors told their kids stories in the first place and why some stories were passed down and others were forgotten.

Each person is special, and each of us have our own things that get us excited. Some of those things that we get excited about, like sports, animals, reading good books (Puppy Place, Anne of Green Gables, Geronimo Stilton, and Laura Ingalls Wilder books are my favorites) are good for us. Also, helping out friends is good for us. Sometimes, we are also tempted to do things which might not be so good for us in the long run. My parents tell me that they were young once, and they have pictures to prove it, even ones where they didn’t have front teeth. They say that they remember how hard it was for them to eat healthy foods, not watch so much TV, play nice with other kids, follow orders and things like that. They say that sometimes they learned their lessons the hard way. They say they wish I could learn all my lessons the easy way. Sometimes they say no to things that they don’t think I should do. My dad says that he doesn’t want to take away my freedoms, but to give me more freedom in life by getting me into good habits. He says that nothing takes away freedom faster than bad choices.

Back in the olden days, I guess parents also said no. For some of them, that was it, but for others, who realized that as soon as the parents weren’t looking the kid was going to do what she wanted to anyway, they came up with two different plans, or strategies. One of them was to tell their kids about magic beings and the other was to help them figure out how to make good choices in life and be good caretakers, or stewards, of themselves.

Strategy 1. I learned about Santa, Rudolf, and the Tooth Fairy early on in life. These magic beings have made it easier for me to understand how I should act. My ancestors, when they were children, were helped by stories about the Nisse, Odin, and Thor– magic beings who could see kids even when their parents or other adults could not and who would punish them or reward them for what they did. On the one hand, this made the choice easy for kids because if Thor would smash you with his hammer, you knew it was not in your best interest to do it. Unfortunately, because no one really ever saw these magic creatures, anyone could make up any story about them and say that is what they said, causing our ancestors to do a lot of things that were foolish.

Strategy 1.5 (kind of like Lion King 1 and 1/2) Parents teach their kids words of wisdom directly and tell them life itself is the punisher of those who do not follow those words of wisdom. For, according to King Solomon in Proverb’s 3:18

[Wisdom] is a tree of life for those who take firm hold of it. Those who cling to it are blessed.

Strategy 2. The other strategy parents used recognized that we kids prefer to think for ourselves and not to be told what to do. That is true for me and probably for just about every kid in the world. That is why a large number of our ancestors often told stories as examples of behavior that worked and of behavior that did not work. They were kind of like Berenstein Bears, but usually they took a little more brain power to figure out. In this way, kids could figure things out for themselves. There is an old saying that goes,

(By the way, if you tell people that fish are yucky, maybe you can take their fish without them getting mad at you.)

Some of the best stories are called Aesop’s Fables, and there are over 600 of them. They were supposedly first told about 2,500 years ago by a Greek slave named Aesop. Another fun group of stories are those of Uncle Remus. Some stories are important for religions, such as the stories of Noah’s Ark, David and Goliath, or the Biblical parables-such as the Parable of the Sower. These stories can be good for kids and for parents. They often have some deeper meaning, or moral. Some versions of Aesop’s fables have the moral of the story written out, but often different versions don’t agree about what the moral is. That is why, even if the books tell you the moral, you need to use your own brain to figure out if it is correct. Sometimes there is more than one meaning. Sometimes the best way to understand the moral is to ask your parents questions you have about ways in which the story can have a figurative meaning. Don’t be afraid to ask questions because that is one way to learn and to remind your parents you are a kid.

The Peacock and the Crane–an Aesop Fable as told by my dad to me. 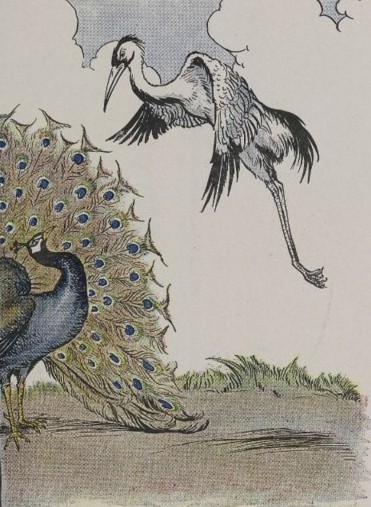 A peacock was once admiring his reflection in a puddle when he came  across a crane, with simple gray feathers. The peacock fanned his extravagantly beautiful tail and let the sun shimmer along its colors. “You are very fortunate,” he said to the crane, “to have someone as beautiful as me too look at. But why should I even acknowledge your existence? You have nothing special.” The crane replied, “I can fully appreciate the beauty of your feathery ornaments, which you admire hourly in your reflection in this puddle and use to impress all the females you encounter whose experience is limited to this small pen. Now follow me as I fly high into the beautiful blue sky where the air is pure and the vision is clear and you can appreciate the beauty that these gray, but functional feathers offer me.” With that the crane flew high into the sky. The peacock, knowing he could not follow, dismissed the crane as asocial, and began to plume his feathers so that he might better impress some other cock who also lived in his pen on the dunghill.

Questions my dad asked me:

What do the ornamental, or decorative feathers, of the peacock symbolize?

What are some possible lessons this story might teach?

People are different and have different values and opinions. If you really liked ornamentation and hated thinking or practical things, how would you modify this story to advance your own interests? Do you think that various versions of the stories could arise because the tellers had a bias one way or another?

Do you feel humbled by this story? If so, do you think that it could  teach a lesson?

Morals: This story illustrates to me that everyone has some good features, or virtues, but usually those who think that they have a monopoly on virtue are missing one of the most important virtues: The peacock is unable to recognize and appreciate the value of flight for the crane and instead chooses to try to make him feel deficient because he lacks some pretty ornamental feathers held only by peacocks. It also teaches that there is beauty in functionality that is often overlooked by those focused on the ornamental. The peacock can’t fly. This suggests that those who place great importance on their appearances might be lacking imagination and understanding, often symbolized by flight.

If you would like to read more Aesop’s fables, click on this link: The Baldwin Project: Aesop’s Fables