Their eyes were my eyes 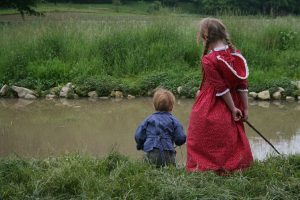 Courage came to me from the height of the mountain, and with it came the dignity
of manhood, and
knowledge of the Tree of Life, for now I was a branch,
running with the vital blood, waiting in the
darkness of the Garden
….to bring forth sons and daughters.

I saw behind me those who had gone, and before me, those who were to
come. I looked back and
saw my father, and his father, and all our
fathers, and in front, to see my son, and his son, and the
sons upon
sons beyond.

And their eyes were my eyes.

As I felt, so they had felt, and were to feel, as then, so now, as
tomorrow and forever.

Then I was not afraid, for I was in a long line that had no beginning,
and no end, and the hand of
his father grasped my father’s hand, and his
hand was in mine, and my unborn son took my right
hand, and all, up and
down the line that stretched from Time That Was, to Time That Is, and Is Not

Yet, raised their hands to show the link, and we found that we were one…

–How Green Was My Valley, by Richard Llewellyn